Robert Downey Jr. says in the May issue of Men’s Journal that he is a devotee of Wing Chun, a martial arts discipline which helped him find his focus and resurrect his career. 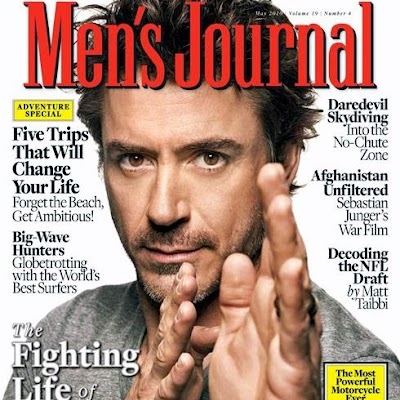 On advice for practicing Wing Chun, a martial arts discipline: “Seriously, don’t worry about looking like an idiot. It’s like life: The less self-conscious you are, the better it works. And remember, lots of ice and Advil afterward. Trust me on that one.”

On how Wing Chun helps him cope: “Wing Chun teaches you what to concentrate on, whether you’re here or out in the world dealing with problems. It’s second nature for me now. I don’t even get to the point where there’s a problem.”

On being reluctant to punch a stuntman full in the mouth while filming Sherlock Holmes: “I was like, ‘I can’t or he’s not going to be able to play with his kids this weekend.’ And Guy (Ritchie) was basically saying, ‘He doesn’t have any kids.’ ”

Eric Oram, Downey’s Wing Chun instructor, on working with the actor: “When he first came to me, insurance companies wouldn’t bond him for movies; he couldn’t get roles. I told him if he didn’t show up to a lesson, I was going to chop off his toes and feed them back to him. One day he didn’t turn up, and I told him goodbye. Then he had a couple of producers call me and vouch for him, saying, ‘He was with us in a meeting; he didn’t have a phone. It’s our fault. Don’t cut his head off.’ He has committed himself to it ever since and turned his life around.”

This site uses Akismet to reduce spam. Learn how your comment data is processed.